I thought this quote on goals was a perfect way to kick of the first blog of the New Year. Not that I’ll be blogging very much, but still… 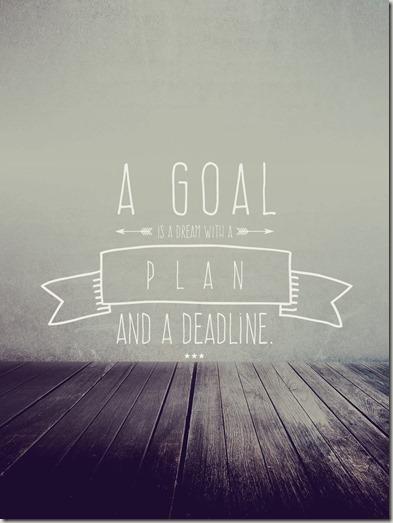 Everyone talks about goals and resolutions as they kick off the New Year. I don’t do resolutions and am naturally a goal oriented girl, so the only thing I’m changing up this year is to remember to have fun. Somewhere in this epic publishing quest I’m on, I forgot the three reasons why I started writing in the first place.

1) To have fun doing something I love..

2) To get the characters in my head on the page.

3)To create awesome stories and worlds that you can get lost in.

Somewhere along the way, I lost sight of those goals because I’ll be honest, getting published is damn hard work. Take it from me – if you’re not careful – it can suck the joy right out of your writing. I’d almost venture to say it’s one of the hardest things I’ve ever done. But on the flip side – aside from my two munch-ka-mites (I had to say that one right?) and my running career – writing a novel is one of the most rewarding things I’ve ever done.

So for 2016, I vow to have fun with writing and much more. I’m so excited to go on my first ever writing retreat with my writer girlz in a couple weeks. It’s going to be F-U-N. So will running a 5K with my daughter – yes she will smoke me, but I don’t care. And the writing conference I’m attending in March should be a blast. Watching my daughter run her first year of high school track and hopefully qualify for New Balance Nationals. Cheering my son on in whatever sport he decides he’s going to give a go this year. Starting another novel (and hopefully finishing the first draft). And, and, and… there’s so many more things I’m looking forward to this 2016.