The Social Runner Chick: It’s all about the Donuts

Have you noticed all the races the non-traditional, novelty races that are popping up?  Let’s see – there’s The Color Run, The Hot Chocolate 15/5K, The Zombie Run, The Bad Prom, The Glow Run, Heroes vs. Villians…you get the idea.  And sheesh these races aren’t cheap.  Many of these races aren’t even timed – they are more about just having fun with your friends while you do a little running (or walking).  It’s social running.

Have you ever done a Donut Dash?  I have not…but think it might be kinda fun! 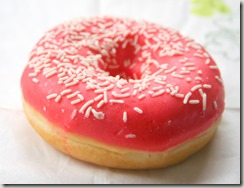 Imagine running 2.5 miles to the local donut shop, consume a dozen melt in your mouth Krispy Kreme donuts, then run yourself back 2.5 miles to the finish.  All within one hour.  Ughh… Although I LOVE, LOVE, LOVE donuts, especially the Krispy Kreme variety – it almost makes me sick just thinking about consuming that many donuts, that quickly.  But over 8,000 participates will attempt just that in the 10th Annual Krispy Kreme Challenge held in Raleigh, NC.

There are other Krispy Kreme Challenges throughout the country, including one in Huntsville, AL which features a four mile run, but you still have to eat a dozen donuts and finish the race within one hour.

For anyone in the Atlanta area, UGA hosts a Krispy Kreme Donut Dare 5K in Athens, GA on January 26th.  (You only have to eat 10 donuts for this one!)

The Krispy Kreme 5K in Evanston, IL has a twist on the theme.  There are a couple donut stops during their 5K and runners are rewarded with two minutes deducted from their finishing time for each donut they eat (and keep down) during the race.  That’s like a win-win.  Of course, I was curious to see just how low the finishing time could be.  Last year the overall winner finished in a clock 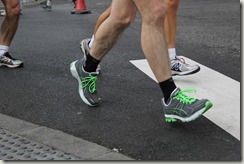 Krispy Kreme isn’t the only player in the donut run market.  Many local donut shops host donut dashes.  So if you like donuts and you like running, not to mention raising money for a good cause (BTW – many of these races raise money for children’s charities) perhaps consider doing a Donut Challenge. There are quite a lot of them throughout the country.  Try searching the Google for “Donut Run” + your city or state, but here’s a brief list I came across in researching this post: