I realized a couple years ago that my passion is girls and sports.  Sports changed my life and I can honestly say, that without sports, I wouldn’t be where I am today.  Sports has taught me perseverance, persistence and drive for perfection.  Teamwork, goal setting and leadership.  To be confident, fearless and mentally tough.  And there are countless other skills and lessons participating in sport has given m 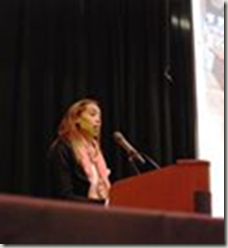 e, helping prepare me for a successful career in business.

Because sports has played such an important role in my life, I try to be a role model and encourage girls to be athletic.    And if they get the chance to do one in college – go for it.  That’s probably why I write young adult novels about high school girls who are also amazing athletes.

I was thrilled to be the keynote speaker for our local school district’s National Girls and Women in Sports Day program last week.  It was quite an honor to talk to the teens and to share a bit of how I got into track and then what my participation in sport has allowed me to do.  Not only did I want to share my passion with them, I also wanted to provide them with some encouraging and inspiring words, not just another boring blah, blah, blah speech.  So the author in me got thinking and decided to open my speech with a story.  I thought I’d share with you too…

Once upon a time there was a girl, who was the oldest of four kids. This girl’s mom was very religious and they spent a LOT of time at church. (Like three church meetings a week, sometimes more). She wasn’t allowed to go to parties, or dances or do organized sports. Every year at school, the girl lived for Field Day. In fact, it was her favorite day of the entire year. But then she got a little older and went to Junior High and they didn’t have Field Day anymore.

One day her health teacher, Mr. Hayden said, “I think you’d be a great runner. 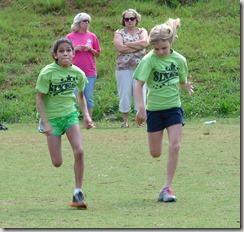 You should try out for the track team.”  For days and days, the girl mulled it over.  She thought about how much fun she had racing on Field Day –  the butterflies at the start of the race, the breeze through her hair as she raced down the grassy field, the sound of her classmates cheering.  Finally she decided her mom wouldn’t be happy because it would disrupt her church obligations, so she told the teacher, “Maybe next year.”

The next spring, Mr. Hayden asked again, “Are you going to come out for the track team?” And again, the girl mulled it over. She really wanted to run track, but even more, she didn’t want to disappoint her mom and her friends at church. She knew doing an extracurricular activity wasn’t accepted and she’d be chastised for doing it.  But what she worried about most was that her mom might get in trouble for allowing it. So again she said, “maybe next year.” (In this particular Junior High, there was 7th, 8th and 9th grades.)

When the girl was in 9th grade, a lot of her school friends were on the track team and talked about how much fun it was. The girl had grown up a lot in the last year and was starting to get the itch for independence.  She also knew running track was what she wanted to do.  She figured out that since her dad wasn’t in the religion if he said it was okay, no matter what her religious friends thought, her mom wouldn’t get in trouble.  So she finally worked up the courage to ask her mom if it was okay and promised her mom she wouldn’t miss church because of track.  So this time when Mr. Hayden asked if the girl would be trying out, she said, “Yes.” 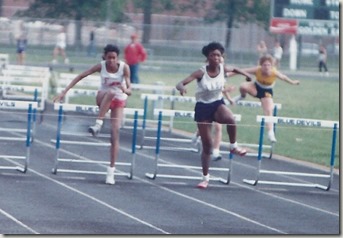 The girl lettered her freshman year, and proudly donned her letterman jacket everywhere (except church.)

The girl ran track sophomore year too. Set a school record in the hurdles and even made it to State in that event, but throughout those two years, her friends from church made it clear that doing an extracurricular activity and hanging out so much with people who weren’t in the 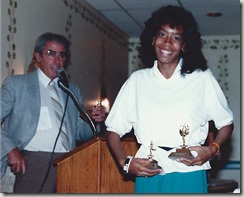 religion was wrong.  The girl was conflicted and succumbed to guilt (uhhh — peer pressure from her church friends) and didn’t run her junior year.

Later in life the girl regretted that decision because junior year is when the colleges were looking at the athletes for recruiting purposes. But at the time, being a student-athlete in college wasn’t even in the girl’s mind.  Honestly, the girl wasn’t even thinking she’d be allowed to go to college because it was yet another thing frowned upon by the religion in which she’d been raised.

Throughout her entire junior year, it felt like something was missing from the

girl’s life. Like a dream deferred… And finally the girl realized:  Track was her missing piece. So senior year, she donned her spikes and this time was one of the top runners in New York State. In fact, she was runner up at the state meet in the 400 meter hurdles. After the meet, Coach Hayden introduced her to a the track coach from Miami of Ohio who’d seen her run. He said, “I hear you haven’t decided on a college yet. I’d like you to come for a visit.”

If this were a Disney movie – said girl would have gone for her visit, gotten offered a scholarship, went to that college and lived happily ever after.

But this is real life and said girl went for the visit, got offered a scholarship and then TURNED IT DOWN!

After taking a gap year to grow a pair (errr – get bold), she picked a college, enrolled and then flat out told her parents where she was going the next fall.  But by the end of freshman year, she realized the track program at the school wasn’t what she needed to develop as an athlete. She knew she wanted to go to NCAA’s and to win championships.  She knew she had one shot at a collegiate career and wanted it to be great!  So after fall semester of her sophomore year, she transferred to Villanova University, where she found her happily ever after. 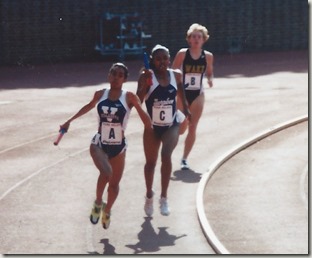