I am so pleased to participate in the cover reveal for Christi J. Whitney’s second book in The Romany Outcasts Series – SHADOW. I’ve already had the please of reading it, and let me tell you, this novel is so, so, SO good!!  Check out the blurb and the excerpt to see what I’m talking about. You’ll definitely want to pre-order this one. 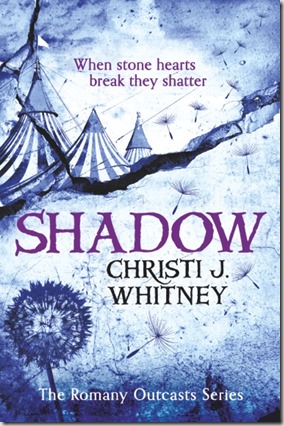 “When stone hearts break they shatter.”

Sebastian Grey used to be a normal teenager. Now he’s a creature whose sole purpose is to be a guardian for secretive gypsy clans.

When the Romany gypsies need his help, Sebastian is given a second chance to protect Josephine Romany – the girl he loves. But this is no easy task when some of them think he’s as bad as the shadow creatures attacking their camp.

Yet to keep Josephine safe, Sebastian might have to embrace his darker side. Even if that means choosing between his humanity and becoming the monster everyone believes him to be…

Goodreads  |  Pre-Order from Amazon, Barnes and Noble, or Kobo!

And if you haven’t read GREY, the first installment of The Romany Outcasts Series, is on sale for only 99 cents until April 25. Get it at Amazon!!

‘My apologies if Caliban hurt you,’ said the man. ‘It’s what he’s trained to do.’

The men lowered their hoods. It was Phillipe and Stephan – two of Quentin’s Marksmen. They watched me with disgusted expressions as I forced myself to stand. My muscles felt like iron cords.

‘You’ve trained him to attack innocent people?’ I snarled, brushing myself off.

‘Of course not,’ Phillipe sneered. ‘He’s trained to attack your kind.’

I really hated that phrase.

I examined my arm. The sleeve of my jacket was ripped, but there wasn’t a mark on my gray skin. My eyes widened. Not even a scratch. But it still hurt like crazy, and I rubbed my arm gingerly.

‘It’s fortunate we weren’t out with the rest of the dogs,’ said Stephan with a cold smile. ‘Caliban here is relatively mild-tempered.’

As if on cue, the dog’s muzzle flashed with sharp teeth.

‘Nicolas asked me to come,’ I said evenly.

I was about to get an escort, I realized.

‘Come with us,’ Phillipe ordered.

Stephan slid his bow from his shoulder and fitted an arrow to the string. ‘Caliban and I will follow behind. Just as a precaution, of course – in case you start getting any ideas in that ugly gray head of yours.’

Quentin Marks’ welcoming committee was not something I’d anticipated. I gathered my bags, and Phillipe led our unpleasant little party across the Sutallee Bridge. I unconsciously slowed as we passed over the abandoned mine shaft where Josephine and I had taken refuge so long ago. There was a sharp poke in the middle of my back, right between my pent wings.

I fought the insanely strong desire to whirl around and shove the arrow down his throat. Instead, I bit my lip, tasting blood, and picked up my pace. We reached the iron fence that surrounded the Fairgrounds. Phillipe pulled out a ring of keys and opened the gate.

I’d assumed everything would look as it had the last time I’d been within the walls of the Circe de Romany. But there were no tents or pavilions. No rides or decorations, either. Only trailers – along with several RVs, trucks, and buses – arranged in a tight circle, right in the middle of the property.

Their configuration created a large open space in the center of the caravan. Tarps were arranged over tables and chairs. A fire pit had been built, and laundry hung from clotheslines spread between trailers. People bustled around the clearing, preparing for the approaching storm. Another peal of thunder echoed overhead. The clouds had thickened, and the sky looked ready to split apart at any moment.

‘Hurry it up,’ said Stephan with another jab to my back. ‘I don’t intend to get wet.’

Lightning flashed. Women scurried to get the clothes off the lines while men anchored the tarps more securely in the ground. Phillipe led me to a small trailer and flung open the door.

The howling wind was motivation enough – even without Stephan’s sharp arrow in my back – and I scampered up the steps. My nose instantly wrinkled at the unpleasant smell. Phillipe caught my look.

‘The dog trailer,’ he said.

‘Just be glad they’re out on patrol,’ said Stephan with a malicious laugh. ‘They’re quite territorial.’

The Marksmen backed me into the stinky enclosure, weapons drawn.

‘We’ll come for you when Nicolas returns,’ said Phillipe. ‘Until then, welcome home.’

With that, he slammed the door, locking me inside.

So yeah – wasn’t that exciting?!  I hope you’re intrigued and go pre-order this amazing book. Until next time… #BeAwesome