Don’t I wish!  I have been watching the first three stages of the Tour de France, so have gotten to see a lot of gorgeous England and today they finished Stage 3 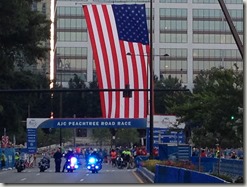 in front of Buckingham Palace.  But this post is not about the TDF or about London.  It’s about me getting to ride in the Press Truck for the 45th AJC Peachtree Road Race.  My job – spotting the elite women for the live television coverage of the race.

If you aren’t from Atlanta, you might not know that with its 60,000 participants, the Peachtree is the largest road race in the country and the largest 10K in the world. It’s also a HUGE Atlanta 4th of July tradition.

This year it was also the host race for the US 10K Championships, so it brought a huge field of elite American distance runners vying or $100,000 in prize money..So being asked to be a spotter was kind of a HUGE deal.  Basically I had to sit on the back of the truck and report back to the broadcast team what was happening in the race and if there were an

y major developments, like if someone fell, or stopped or if there was a break.  It was crazy noisy and chaotic with four helicopters following the race, motorcycles with cameras and crowds cheering, music from the spectators; not to mention the other guys on the truck shouting things – so my fingers were busy sending updates by text or screaming into my cell phone.  It was quite hectic with the runners all bunched, trying to figure out who the top few were and sending that info back, but then there was a break of about eight runners at about 1K and it was much easier to provide faster updates.  I can’t tell you how exhilarating it was!!  Check out photos of my day… 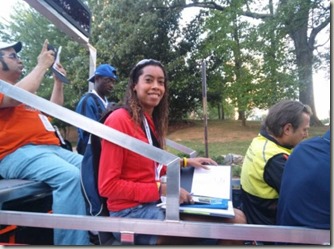 Here’s a photo of me on the back of the Press Truck.. See that notebook in my lap?  The night before, I printed out all the bios and pictures of the athletes I found on Google so I’d be able to quickly know who was who. 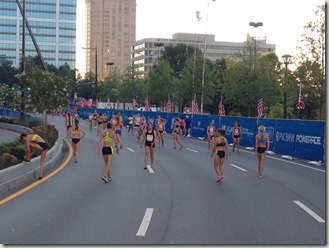 The elite women warming up with strides before the race. 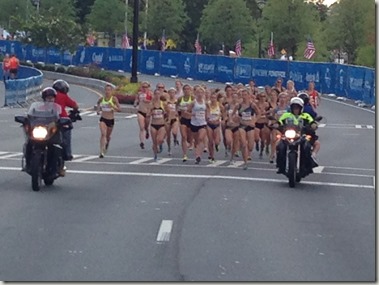 Here’s a view from the back of the truck as the race began.  Isn’t that cool?! 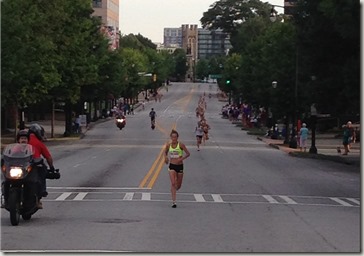 Amy Hastings solidly in control of the race. 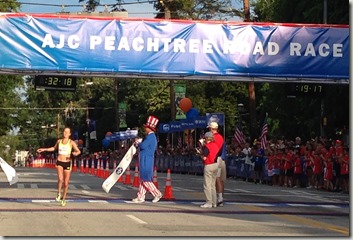 Amy Hastings crossing the line in first place with a time of 32:16. 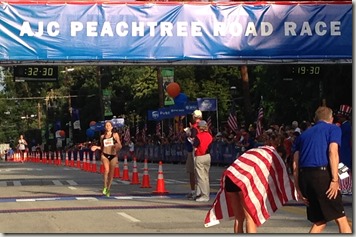 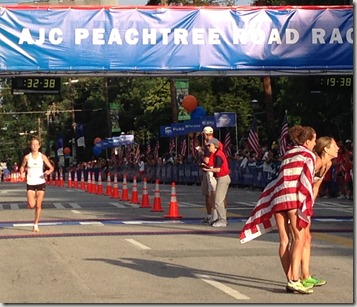 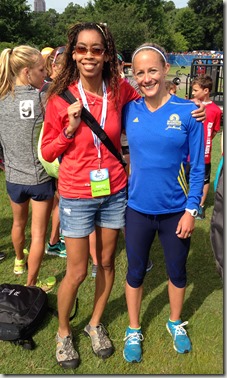 Jen Rhines (my former Villanova teammate and suite mate my 5th year at ‘Nova) celebrated her 40th birthday by winning the Master’s race and taking 7th overall in 33:04!! 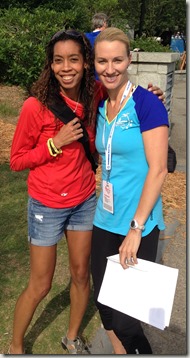 And here’s me with another VU track and XC alum – Carrie Tollefson.  She was one of the broadcast analysts for the television coverage.