Halloween According to Me

I was raised in a very conservative religion, one that didn’t celebrate holidays, especially one as blatantly pagan as Halloween.  There was NO dressing up as a fairy, princess or super hero.  There was NO trick-or-treating.  There was NO handing out candy.  Yeah – we were the family that turned the lights off and pretended not to be home.  But my siblings and I would sit by the window and check out all the costumes.

Back then, I didn’t know any different so it wasn’t a big deal and I didn’t really feel like I was missing out on anything.  But looking back on it now – it pretty much sucked.  I think what sticks out most to me now is that I was brainwashed into thinking that all my classmates who went trick-or-treating were worshipping the Devil and that it was for our safety that we didn’t participate in those activities because there were bad people out there tainting candy.  Why does religion insist on using scare tactics to get people to act one way or another?  But that’s a topic for another day.

I celebrated my first Halloween in college.  When my friends found out I’d never been trick-or-treating, they decided it was about time I went.  So a bunch of us dressed up and went trick-or-treating in a neighborhood next to campus.  The night was super cold, but I had THE BEST time, not to mention scored an awesome supply of candy.  Free candy to a college student – SCORE!!  I dressed up as Wonder Woman, one of my favorite super heroes.

Flashback alert:  When we were little, my sister and I were obsessed with Wonder Woman.  We’d fashion the gold bracelets out of toilet paper rolls, color a red star on them and slap them on our wrists.  Then spin around and pretend to transform into Wonder Woman.  That was probably against my religion, I just didn’t know it, because Wonder Woman worshiped the almighty Isis.

Okay, okay Halloween does have pagan roots, but I’m thinking just about every single thing we celebrate does.  It’s tradition, it’s history, it’s who our ancestors were and it’s how we preserve a link to the past. 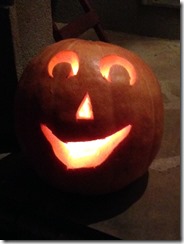 In researching my Scottish Immortals novel, I did a lot of research on fairies and the supernatural in Scotland.  It was believed that Halloween, also called All Hallows Eve, was the night when souls of the dead roamed free and in some areas of Scotland it was customary to leave an empty chair and a plate of food for those hallowed guests.  Trick-or-treating is called “guising” and in the past, children were dressed up disguised as evil spirits so they’d blend in with the dead souls roaming about.  And… they used to use make turnip lanterns whereas we use pumpkins.

(all photos by Me)