The Suckiness of IT Band Syndrome

Post half marathon, aside from motivation issues due to the cold weather, I’ve been plagued with IT band issues.  For those not in the know, the iliotibial (IT) band is the ligament that runs along the outer thigh from the hip to the shin.  It’s very painful if it gets tight or inflamed, and that’s what happens when you don’t stretch, like me.  Or when you get old, like me.  Ha!

Speaking of old, I’ve been officially retired from Track & Field long enough to get

inducted into the Hall of Fame at my alma mater, Villanova University.  If you know anything about the collegiate running scene and the Villanova running tradition, you’ll know that this is a major – huge – crazy big deal!  I am humbled and honored to be worthy of such recognition.  But more on that at a later date.

Back to the suckiness of my IT Band.  ITBS is a very common overuse injury in runners.  Especially women runners.  Usually I have one or the other flare up, never both.  But two weeks ago, I was sidelined with pain in both knees!  If you’ve never had ITBS you’re lucky.  Let me attempt to describe it for you.  Imagine you’re trying to bend your leg and can’t because the ligament on the outside of your knee is tight like a guitar string and when you bend it, it feels like it might snap.  Finally you work up the courage to bend your leg – or maybe you have to because walking requires you to bend your leg – an excruciating pain shoots into your knee like you were just poked with a screwdriver.  Owwwww!!

Remember the part about bending the knee, I almost couldn’t walk up and down the stairs, which is a problem when you live in a two-story home.  Sleeping hurt because I like to sleep on my side, which didn’t work so well because even the pressure of the mattress against my IT band killed!   So I did what I never did when I was competing – took two full weeks off.  No running.  No biking.  No pool workouts.  Just walking around the mall for last minute Christmas gifts and much needed stretching.

I’ve been pain free for about a week now, so despite the frigid temperatures, I ventured out to give my legs a test run.  I took the Ferginator with me (that’s her in the photo), wh 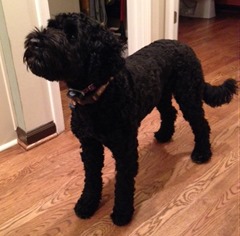 ich may have been a mistake as she was trying to set the tandem Portuguese Water Dog + Human speed record over 1200 meters.  Since I didn’t run with a watch (because sometimes I like to get crazy like that), I don’t truly know how fast we ran.  But I can say it was well under 8 minute pace.  Not exactly a wise move after a two week hiatus, but you know what they say about hindsight…

All told, I ran 1.8 miles.  That’s quite a far cry from the 5 to 6 milers I was cruising through in October and November.  However, I’ve got to start somewhere, right?  Although I don’t want to jinx it, my legs felt good and most importantly, I stretched (a little bit) after to keep my IT bands loose.  I’ll take tomorrow off and then January 1st, we’ll see if the legs can crank it up to a whopping 3 miles.

Gotta get ready for running with the Woodstock Youth Track crew.  Did I tell you?   I’ve been drafted to help coach.

1 thought on “The Suckiness of IT Band Syndrome”